Missing Kids and Their Bicycles - Cases of Dario Cicolecchia, Janice Pockett, and Others

Season 2 of the hit TV show Forensic Files included an episode (Episode 12) that contained information that those that work on missing person's cases should note. The episodes tell of the missing person's case of Dario Cicolecchia, a boy in Switzerland who went missing in 1993. Importantly, this boy was found, his murderer was apprehended, and this murderer also made statements to the police about how he operated. I think there's a nugget of information that's worth extracting from this and using as food for thought in similar cases.

Dario went missing after departing his home on bicycle to go fishing. He was later found dead and mutilated in a Swiss cornfield. Forensics was used in this case and it was discovered that the boy had been drowned. In the water in the boy's lungs, investigators found diatoms, which are simple one-cell organisms that are only found in water.

They were then able to find these diatoms in a nearby creak and that isolated the murder location. They also found the same kind of diatoms in a suspect's car, likely because the victim had been put there after he drowned. When the water seeped out of the victim's mouth, it created the potential to link victim to car to murder location to suspect.

The name of the convicted murderer was Roland Kubler. In the episode of Forensic Files, which was called "Micro-clues" and which aired on December 18th, 1997, Kubler is examined.

Importantly, he claims that what lead him to Dario was the fact that the boy had left his bicycle near the road. When Kubler drove by, he saw the bicycle and realized that it meant that a young boy was nearby. Due to his, Kubler's, instabilities he wasn't able to resist finding this boy, which eventually lead to Dario's murder.

As presented, Kubler didn't really cruise around looking for bicycles as part of a modus operandi. That's interesting because there are a lot of cases where children have gone missing with only their bicycles found. It could be that leaving their bicycles in a visible spot is part of the chain of events into what caused them to go missing. You can see how a pedophile would be 'triggered' into action when presented with a secluded area and hints of children nearby.

The missing person's case of Janice Pockett comes to mind for me. She has been missing from Tolland, Connecticut since July 26th, 1973. She owned a green bicycle that would definitely be recognized as a child's bicycle with its banana seat.

The day she went missing, she rode her bike to a wooded area with plans on retrieving a butterfly that she'd put under a rock earlier. Importantly, no one knows what happened to her after this but her bicycle was found near a road.

One scenario, with probabilities that are debatable, is that Janice left her bike by the road, entered the wooded area, and then someone drove by and saw her bike -- just like Kubler saw Dario's. An individual with problems might not be able to ignore the chance to investigate the wooded area -- just as Kubler couldn't.

The suggestions I'm making are kind of along the lines of history repeating itself. There is also an assumption that serial rapists and murderers are all somewhat alike.

There are other cases where a bicycle is found that belonged to a missing child's. That this item might be an 'advertisement' to a pedophile is something that shouldn't be ignored. It suggests a lot of things to me, especially non-family abduction and abduction by someone who is serial in nature. If you are coming across missing person's reports where a bicycle, or even a scooter or skateboard or something else of that nature that implies 'young person nearby,' then think about the visibility of the object and how it might be something that a pedophile or kidnapper really notices.

This could be a solid basis with which to start some reasonable conjecture. To me, it suggests that the victim was pursued rather than the victim stumbling onto something.
Posted by Shane Lambert at 7:05 PM No comments:

NamUs doesn't have a lot of information posted for those looking at the case of Jacqueline Kinney. The site says she went missing on December 5th, 1969 from Canton, Connecticut. At time of writing, 50 years are about to pass since she went missing. I've decided that 50 years is my deadline for working on a MP's case so I thought I'd give her case an hour of research tonight. 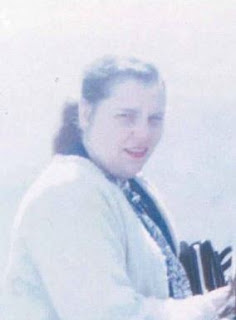 
Information I gathered from reading articles in historical newspaper articles:

The missing person's case of Trenny (Teresa) Lynn Gibson is one of the most puzzling missing person's cases from the 1970s. Trenny was a part of a school field trip on October 8th, 1976 near a site called Clingsman Dome in the Great Smoky Mountains National Park. She went missing from a trail at about 3pm despite being part of a large group of classmates taking the trail. She has not been heard from since.

Roman was only 20 feet away from his father on the trail when he went missing. He was 10 years old and looking for a shortcut to the parking lot. The "tangled mess" of the area then caused a him to get lost. The impression I get of the area is that a short off-trail excursion might have major implications. The area sounds like one where any kind of diversion could disorient you quickly.

My guess is that Trenny went off-trail voluntarily, perhaps to relieve herself or perhaps to try and find a shortcut to the parking lot. If she was doing either of these, she might do so quietly and covertly. She wouldn't want to be seen relieving herself. If she was looking for a shortcut, then she might have understood that this would be frowned upon by the field trip's leadership.

From that point, I think she suffered some kind of a misfortunate accident or animal attack. She might have simply fell down a cliff and might be wedged somewhere that people never go to.

But I did find a lot of newspaper articles that described bear attacks in the Great Smoky Mountains National Park. One way to get attacked by a bear is to quietly walk through the forest. Black bears are in the area and they are common in my niche of North America as well (I call the Canadian Rockies my home these days). A rule of thumb to avoid a black bear is to make noise when you are walking through the forest: if you walk quietly, you startle them and can provoke an attack. If black bears hear you coming, they often leave and that's true to my hiking experience.

At the time when she disappeared in nearly mid-October, bears would be pre-hibernation and looking to add a lot of body fat for the upcoming winter. The following article describes a missing person whose car was found in The Great Smoky Mountains National Park. Near this car...human bones that had been gnawed on by a bear were found.

I wouldn't be surprised if Trenny's remains are within a mile of where she was last seen and that she was simply missed during the searches. I also can't ignore that there are black bears in the area. Once the possibility of animal interference with remains is acknowledged, then anything could happen to the remains, including consumption and spreading of body parts into hard to find areas like crevasses and dens.


Posted by Shane Lambert at 1:42 PM No comments:

Emma Lorene Vaughn's date of last contact is July 10th, 1982 according to NamUs. According to some newspaper clippings from 1982, the date was actually July 1st, 1982. The contradiction might be relevant. It's possible the news agencies had the date wrong too but websleuths should be open to considering Jane Does found in the nine days between July 1st, 1982 and July 10th, 1982.

Here are the articles:

Posted by Shane Lambert at 4:26 AM No comments:

Virginia Lynne Uden went missing with her two sons, last seen on September 12th, 1980. Her case details, according to NamUs, are as follows:


The news did cover this disappearance. Her vehicle was a station wagon and it was found in Shoshone National Forest.

Virginia's mother offered a $1000 reward for information. An article about that is below while the actual advertisement is further below. 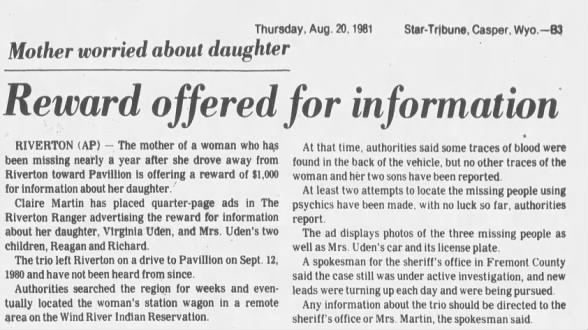 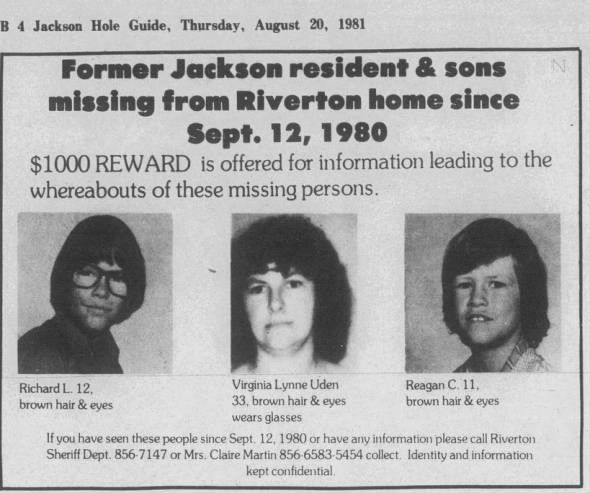 There is a conviction is this case. The adoptive father, Gerald Uden, confessed in 2013 to killing them. He has since recanted and blamed his wife, Alice Uden. This a case where the mystery of what happened to them is not challenging: it's clear that they have been murdered. However, their location is not known.
Posted by Shane Lambert at 5:55 PM No comments:

NamUs #MP59776 stands out in the month of September 2019 for NamUs. It was just added to the database even though the MP was last seen in 1931. Here's what NamUs states on the matter: 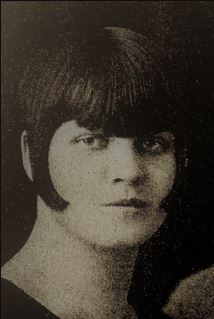 I searched her name in newspaper databases. Nothing appeared for the exact name but "Opal Fulks" worked. Her husband Emery Fulks sought a divorce, according to an article I found in 1939:

NamUs #UP60245 - Body found near McFarland in an orange orchard

NamUs #UP60245 notes:
The following article appears to be related to the case. It's strange in that it actually names a murder victim who was found in an orange orchard near McFarland on the same date as NamUs #UP60245. Coincidence? Related news? I thought it was worth posting. 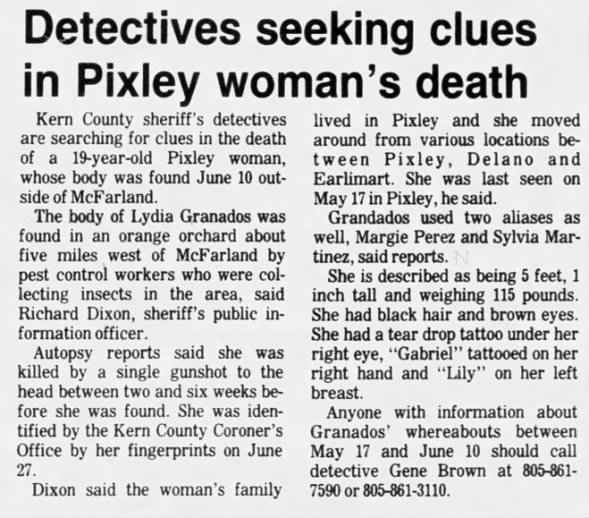 Posted by Shane Lambert at 9:07 AM No comments: